Eckrich, Operation Homefront, Randy Houser Invite Military Family to Be "Like a Cowboy"

LISLE, Ill. -- Eckrich and platinum-selling country music star Randy Houser honored a military family with a night of surprises during Houser's November 22  tour stop at Royal Farms Arena in Baltimore, Md. The special event began with Air Force Staff Sergeant Christopher Solso and his wife, Clare, being escorted backstage for a surprise meeting with Houser, during which he and Giant Food presented the family with a year of free groceries on behalf of Eckrich and invited the Solso family on an all-expenses paid getaway to Tucson, Ariz., where they will enjoy a VIP experience at a Randy Houser concert and visit the site of his hit music video, "Like A Cowboy." 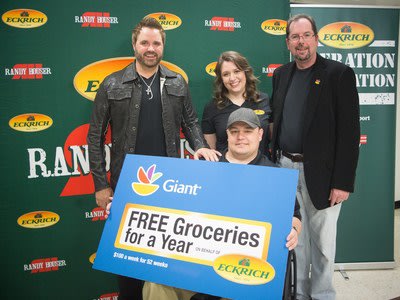 "As a regional supermarket chain that operates in a market where many military bases are located, one of Giant's core pillars of community outreach involves supporting our service members and their families," stated Jamie Miller, manager, public and community relations for Giant Food.  "We're proud to partner with Eckrich and Randy Houser to support those who give so much for our country."

During the VIP trip to Tucson, Arizona, the Solso's will have an action-packed weekend including a tour of the film studio and site of the epic "Like A Cowboy" music video, which was filmed at the same studio where classic Western sagas including Joe Kidd, The Frisco Kid, and Tombstone were filmed. They will also be treated to a VIP experience at Houser's concert on December 14, including another opportunity to spend time with Houser before the show.

This is Houser's first year supporting Operation Homefront families and partnering with Eckrich, part of the John Morrell Food Group, a subsidiary of Smithfield Foods, Inc.  Operation Homefront is a national nonprofit which provides emergency financial and other assistance to the families of service members and wounded warriors.  Throughout the year, Houser has hosted many military families at his concerts and provided them with a variety of special experiences and surprises from Eckrich, which has already provided more than $50,000 in free groceries to military families this year.

"I'm excited for the Solso family to experience the trip to Tucson," said Houser. "They're going to have such a great time visiting the sets of the music video and seeing the show at the historic Fox Theatre.  Being a part of 'Operation Inspiration' and getting to meet with military families like Christopher and Clare Solso is such an honor.  I am proud to have been a part of this surprise and can't wait to see them again in December."

Houser also presented the family with an autographed guitar from Eckrich as a keepsake to remember the special night.

"The Eckrich 'Operation Inspiration' campaign has been a great opportunity to give back to our military families," stated Chuck Gitkin, vice president, marketing, innovation and R&D for the John Morrell Food Group.  "Supporting and honoring military families who sacrifice for us every day is an important part of what Eckrich stands for.  We're proud to have partners like Randy Houser and Giant to help offer our support for military families."

The surprise trip, year of free groceries, and guitar are all part of the Eckrich "Operation Inspiration" campaign, which supports and honors military families with nonprofit partner Operation Homefront.  In its third year of partnership with Operation Homefront, Eckrich has already donated more than $750,000 to the organization.

"It's really overwhelming right now," said Christopher Solso.  "There are so many military service men and women who are still fighting for our freedom and it's amazing that Eckrich and Randy Houser are honoring our family.  We are overwhelmed and excited at the same time."

For more information about Eckrich, including "Operation Inspiration," and its partnership with Randy Houser, please visit www.facebook.com/EckrichMeats.

About Eckrich: Founded by Peter Eckrich in 1894, Eckrich has a rich heritage starting from a small meat market in Fort Wayne, Ind. Through it all, Eckrich meats have been recognized for their great taste and supreme quality, craftsmanship, care and pride. For more information, visit www.eckrich.com.

About Giant Food of Landover, Md.: Giant Food LLC, headquartered in Landover, Md., operates 169 supermarkets in Virginia, Maryland, Delaware, and the District of Columbia, and employs approximately 20,000 associates. Included within the 169 stores are 158 full-service pharmacies. Giant opened the first supermarket in the nation's capital on February 6, 1936. Giving back to the community is a cornerstone that was instilled by the founders more than 78 years ago. The company's core areas of giving include hunger, education, health and wellness, and supporting service members and military families. In 2013, Giant's monetary and in-kind contributions exceeded $13 million, and the nation's capital grocer helped partners provide 64.6 million meals. For more information on Giant, visit www.giantfood.com.

About Randy Houser: Randy Houser took country fans and industry insiders by storm with the 2013 release of his Stoney Creek Records album How Country Feels. Scoring three consecutive No. 1 hits with the title track, "Runnin' Outta Moonlight" and "Goodnight Kiss," Houser also earned the American Country Award for Most Played Radio Track: Male ("How Country Feels") and his first No. 1 as a songwriter ("Goodnight Kiss"). His new single, "Like A Cowboy," is the fourth release from How Country Feels and was written by Houser and Brice Long. Previous successes include Houser's 2009 Top 5 hit "Boots On" and debut power ballad, "Anything Goes." He is currently touring with Dierks Bentley on the Riser Tour and continues to perform his own headlining dates across the country. For more information, visitwww.RandyHouser.com.